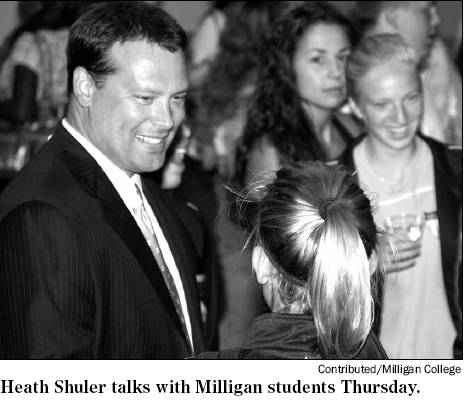 MILLIGAN COLLEGE — Heath Shuler is quick to give Jonathan Crompton a vote of confidence.

Shuler was in town Thursday night to speak at Milligan College in conjunction with Character Counts!, a character-education initiative in schools.

Crompton did a little character-building at Shuler’s home while in high school in Southwestern North Carolina. Crompton and his prep teammates worked during the summer on Shuler’s property, including putting up fence for some 30 acres.

“Jonathan grew up — from the house that I live in now — a mile away, if that,” Shuler said. “He could probably run to my house faster than he could drive because he lived on one side of the mountain and I live on the other.”

“He’s a much better football player than he is a worker,” Shuler said with a smile. “I mean he did work, he did incredible work — I’m not taking anything away from his work ethic. But all he wanted to do was throw the football after work.”

Shuler said he and Crompton watched film together to analyze defenses when Crompton was in high school.

“So many times I can remember Jonathan saying, ‘You think we could knock off a little early today and go throw the football,’” Shuler said. “I had some very special times with Jonathan throwing the football in the front yard.”

Before bypassing his senior season at UT to become the third overall pick in the 1994 NFL draft, Shuler finished second to Florida State’s Charlie Ward in the Heisman Trophy voting. He was a dual-threat quarterback, as is the 6-foot-4, 220-pound Crompton.

“His mentality on the field is very much like I felt like mine was — do whatever it takes,” Shuler said. “Jonathan won’t be one of these guys that wants to slide and get out of bounds. He’d just as soon run over the linebackers and the secondary as run around them.”

Crompton started at Arkansas in place of an injured Erik Ainge in 2006. His official era will begin at UCLA. The Vols began the post-Shuler era against UCLA in ’94, the game when fifthyear senior Jerry Colquitt was lost for the season to an injury.

“I’ll never forget hearing it,” Shuler said. “My dad actually called me and said, ‘Jerry just went down and it doesn’t look good.’ At that point, I’m sure there were a lot of people that were disappointed that I’d left after my junior year, but after that injury, everybody goes, ‘Wow, maybe that was the right choice.’”

He suggested Fulmer is cautiously optimistic about the Vols’ potential. The ability to reach it, obviously, hinges on Crompton’s right shoulder.

“He has really grown and matured as a person and that’s the thing that I’m so proud about,” Shuler said. “Regardless of what he ever does in football, I think the way he’s been able to grow as a person has meant more to me than anything.”

Many would say the same of Shuler, whose second stint in Washington has gone much more smoothly than the initial one with the Redskins. The Blue Dog Democrat (fiscally conservative) defeated eight-term incumbent Republican Charles Taylor to get back to Washington in a different line of work, although football and politics have similarities.

“It’s still a contact sport in a lot of ways,” Shuler said.

He said he first started thinking seriously about politics while watching the furniture industry crumble in North Carolina.

“We’ve got an uphill battle and we’ve got ourselves in a very difficult situation (in America),” Shuler said. “If you look at the economy and the way it is right now, if you look at the energy policies and look at healthcare, we’re in a war — I don’t know if our country has faced that many issues at once. Certainly not in my lifetime.”

“We started using him as a spokesperson right after Lee Greenwood,” Jones said. “Heath’s always come anywhere I’ve asked him to come. I knew that he was a person of character when I recruited him.”