BY BEN SHUPE
SPECIAL TO THE HERALD COURIER 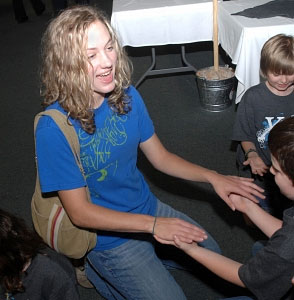 Martin was awarded the Kenneth and Jacklyn Oosting Scholarship, a $23,000 scholarship that goes toward tuition and room and board. She is the second Central student in two years to receive the scholarship.

Martin was chosen for the scholarship after a review of her college application revealed she met the requirements – an ACT score of at least 30 and a good high school grade-point average. Extracurricular activities and community service work were also taken into consideration.

“Milligan was my first choice for a really long time,” Martin said.

Perhaps the primary reason Milligan College appealed to her is the way the school, a Christian college, approaches the religious aspect of its curriculum.

“The main thing I liked about Milligan was how the faith was integrated with the studies,” Martin said. “They don’t force-feed you. They have a humanities program that is really good.”

She will major in biology with hopes of attending medical school after graduating.
With aspirations of becoming a family doctor, Martin looks forward to periodically going on medical mission trips. So what’s the attraction of the medical profession for her?

“Just learning about the human body and being able to relate to people,” she said. “Doctors have a huge impact on people. People respect doctors because they’re helping them feel better.”

Having played soccer since age 7, Martin plans to play on Milligan’s team.

“I have gotten to work out with the soccer team a little bit. The girls were really nice, and I liked the coach a lot,” she said.

In addition to academics and athletics, Rachel also has a history of volunteer work, which she plans to continue at Milligan. She’s volunteered at her church, traveled to Mexico on medical mission trips, volunteered during summers at the Appalachian Christian Camp, and she’s served as an assistant coach for a young girls’ soccer team.

“It’s going to be great because I will have so many options,” Martin said of Milligan. “They offer a lot of things you can get involved in. I’m excited about that.

“I think you’re living life to the fullest when you’re not caring about yourself, and you’re focusing on other people instead.”

She has already made an impression on Milligan College staff.

Admissions counselor Christian Thompson commented about the significance of the Oosting Scholarship and what winning award says about Martin.

“It shows that she is an outstanding individual who is committed to her faith and her community,” Thompson said. “It also shows her academic ability and her commitment to achieve.”

CategoriesArchives, Bristol Herald Courier
Posted by on May 24, 2008.